Uses of the Pronoun Se with Syntactic Function

The uses of the pronoun se can be a mystery to students of Spanish. It is one of the most used words in our language, but even native speakers do not understand its uses perfectly. In this article we will unravel this mystery.

Before we begin, it is necessary to make some clarifications. Some of the uses of the pronoun se are personal; this means that we will need to choose the right pronoun for each person. For this, we will use the list of reflexive pronouns: me, te, se, nos, os, se. However, other uses will only require the third person: se.

In this article we will learn about the first group. That is, the uses of the pronoun se in Spanish with syntactic function. If you want to learn the rest of the uses of this pronoun, you can do it here.

Don’t forget to check our free resources section, as it is constantly updated with very interesting grammatical contents.

As we have said before, the pronoun can have syntactic function; specifically direct and indirect object. When they fulfill this role in the sentence we can distinguish four uses: variant of the pronoun le, reflexive, reciprocal and dative of interest.

Variant of the Pronoun Le

However, when the two pronouns are both third person ones, the combination le lo or le la and their plural variants is not acceptable. Instead, we must replace the pronoun le with the pronoun se. Despite this change, the function of the pronoun se will still be as an indirect object.

Reflexive Use of the Pronoun Se

Another value of the pronoun se in Spanish is reflexive. When we use it this way, the speaker expresses that the subject of the sentence not only performs the action, but also receives it.

The reciprocal use works in a very similar way to the reflexive. The difference lies in the subject, which has to be multiple. In this case, the verbal action is performed by the subjects, one to the other; therefore, they also receive it.

Dative of Interest or Ethical

This is one of the most complicated pronoun uses to understand. The word dative refers to one of the cases that existed in Latin and other languages that use declensions. The dative case served the function of indirect object, mainly.

The dative of interest points to the person indirectly affected by the verbal action, but with a high emotional charge. With it, we emphasize the special interest that the person has in the performance of the action. But the main feature is that we can eliminate it and the sentence will keep its meaning, although more attenuated.

In the first sentence, we can eliminate the pronoun without problem, but with it, we emphasize that the student studied it because it was of great importance and interest to him. In the second example, the teacher shows a clear interest in the student not failing. However, we can also omit the pronoun se.

By the way, if you are interested in obtaining an official certificate in Spanish, remember that you can prepare for the DELE exam with our accredited teachers. And as a novelty, it is now also possible to take the SIELE exam online and from home.

And, of course, if you want to put into practice everything you have learned in this article about the uses of the pronoun se with syntactic function, reserve a class at Spanishviaskype.com. 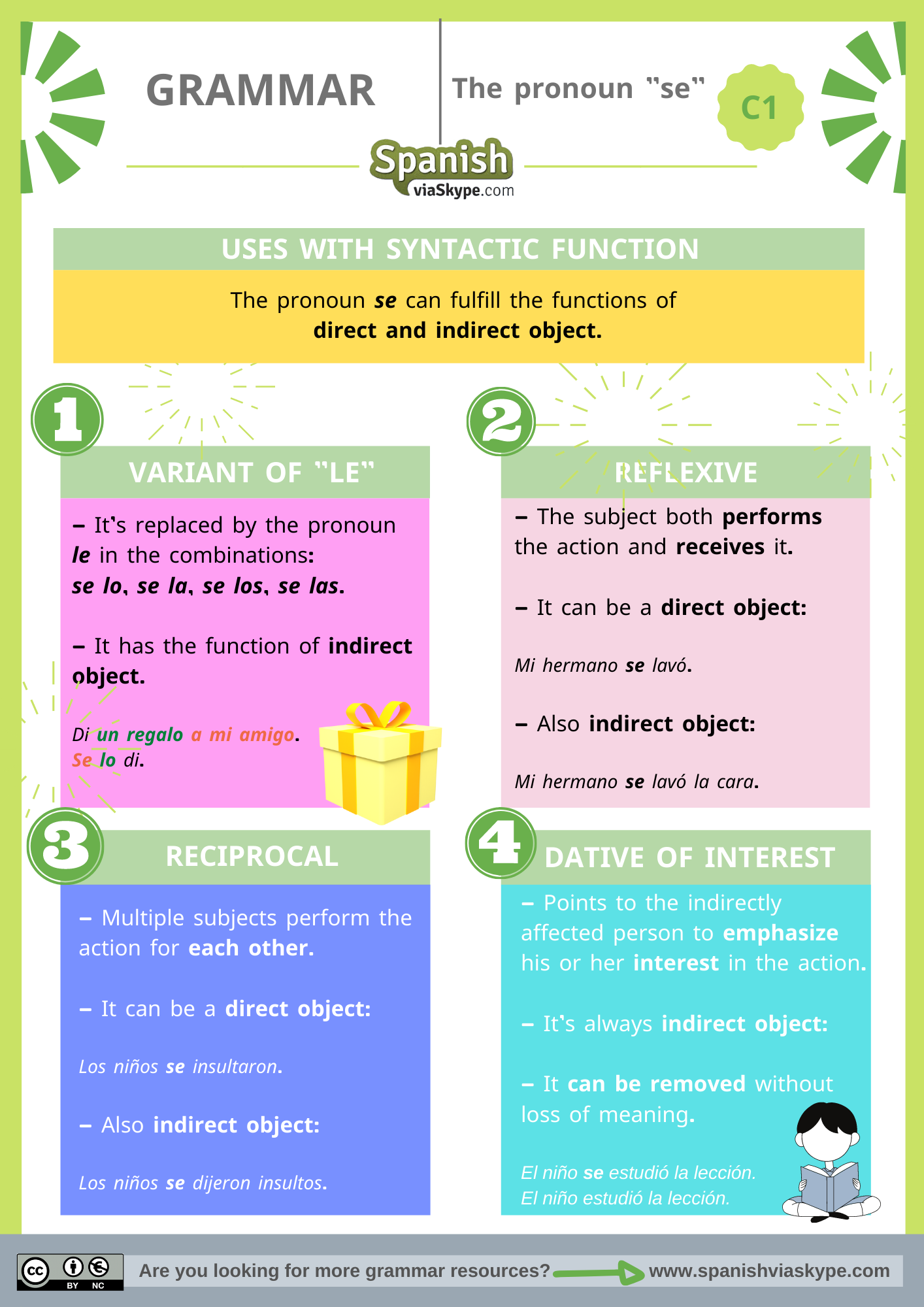