The Conditional Perfect in Spanish

The conditional perfect in Spanish is the verb tense of indicative that is studied at a more advanced level than the rest. This is because it is closely related to another verb tense: the pluperfect subjunctive. With the combination of these two verb tenses, we can speak of the unreal, hypotheses, an alternative past. Today we are going to know its origin, its form and its uses in Spanishviaskype.com.

As usual, in our articles on verb tenses, we are going to explain the meaning of its full name. We call it conditional perfect or compound indicative. It is conditional, that is, it indicates a potential or possible action. At the same time, it is perfect, that is, it expresses a finished action; moreover, it is compound, so it is formed by more than one word: an auxiliary verb and a main verb.

The controversy lies in the consideration that the conditional perfect in Spanish is part of the indicative mood. We have already mentioned that it expresses unreal actions, hypotheses and speculations. This is more proper to the subjunctive. Throughout history, it has even been considered an independent mood, the potential mood. Nowadays, however, the tendency is to consider it part of the indicative. The explanation is not based on its use or meaning, but on a syntactic issue. The subjunctive can hardly form sentences independently as a main verb. On the other hand, the conditional does, in the same way as the other tenses of the indicative.

How Is The Conditional Perfect in Spanish formed? 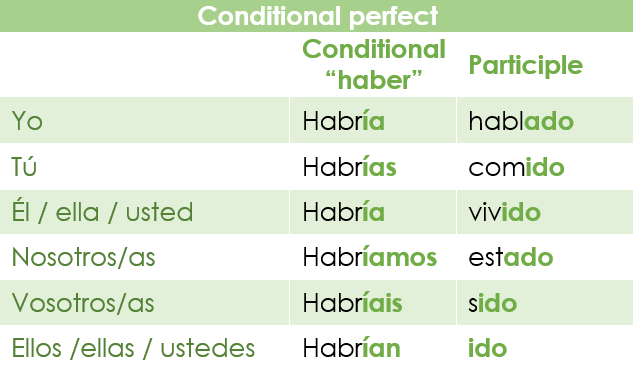 How Is the Conditional Perfect in Spanish used?

We have already mentioned that the conditional perfect in Spanish expresses hypothetical actions in the past, that is, actions that never happened but could have. This verb tense answers the popular question “what if…?” Also, its “perfect” characteristic places it at some point in time prior to another hypothetical action. Below, we will break down this general meaning into several uses:

Probability in the Past Prior to Another Action

As we have already said, the conditional perfect in Spanish places the action at a time prior to another in the past. Thus, we can express an assumption in the past.

As we see in this example, the possibility that their son went to the gym could have occurred before the first person’s call.

The conditional perfect in Spanish has the meaning of unreal hypothesis in the past as its main use. For this purpose, we usually use a conditional subordinate clause. In Spanish, as in most languages, we have different types of conditional clauses. Depending on the probability of the condition and its consequence, we will use indicative or subjunctive tenses. Before continuing, we recommend that you read this article about all the types of conditional sentences in Spanish.

To construct this type of sentence, the compound conditional is placed as the main verb. On the other hand, in the subordinate clause, normally introduced by the conjunction si, we use the pluperfect subjunctive. In this way, we express an unreal condition in the past, the consequence of which would also have an effect in the past.

On the other hand, if the effect of that condition were to occur in the present or in the future, we would change the main verb and use the conditinal simple.

The Perfect Conditional in Spanish in the Reported Speech

When we reproduce an already finished conversation, verbal changes occur. We call this way of speaking indirect speech”the reported speech“. Don’t forget to refresh your knowledge on this and other topics in our free grammar resources section at Spanishviaskype.com. When the speaker expresses a hypothesis in the future using the conditional simple, we should change it to the perfect form in the reported speech:

Advice and Wishes in the Past

We can also express advice and wishes in the past with the conditional perfect in Spanish. When we use it to give advice, we can emphasize the expression with forms such as si fuera tú, yo que tú, en tu lugar yo…. We have to be careful when we use it this way, because depending on the tone, it could seem more like a reproach:

In addition to this, we can also express a frustrated wish, because it never came true. It is usually accompanied by an explanation introduced by pero.

As we can appreciate, the conditional perfect  in Spanish is a tense that has quite a few uses, although all of them are summarized in the unreal hypothesis in the past. It is necessary to master its use, mainly in conditional sentences, to reach the advanced level of Spanish. If that’s your goal, we recommend you to reserve classes on Spanishviaskype.com: si yo no hubiera nacido en España, ya las habría reservado.