Está and Hay in Spanish to Express Location

Está and hay in Spanish to express location is one of the first lessons that a basic level student has in Spanishviaskype.com. Both verbs, estar and haber can be used to describe a place. However, they work in different ways.

The verb estar shows the location of the subject, while the verb haber can express the existence of the objects in a place. Let’s look at each one in depth.

Está and Hay in Spanish: Location of the Subject

As we have said before, we often use the forms está and hay in Spanish to express location, but the verb estar does so by expressing the place where the subject is located. Therefore, the verb and the subject must agree on number (singular and plural) and person (first, second or third).

Likewise, the subject must be determined, since we already know it exists, but not where it is. For this reason, the subject is normally preceded by a definite article (el/la/los) or determinative adjectives: possessives (mi/tu/su…) and demonstratives (este, esa, aquellos…).

We must not forget that está and hay in Spanish are not the only ways to express location. We can also use the verb ser, but this is used exclusively to indicate the location of an event. Therefore, in addition to the differences we have already studied between ser and estar, we must also be attentive to the locations.

The verb haber to express location

Está and hay in Spanish can show location, but verb haber actually expresses the existence of the direct object in a sentence. The construction in Spanish is impersonal, so we do not use a subject. Because of this, the verb haber is invariable and we always use it in the third person singular. In the present indicative, the verb haber has an alternative form to the usual one (hay) which is used to express existence or impersonal obligation (hay que limpiar la casa).

In contrast to the verb estar, the direct object of the verb haber is not determined, it is not known, since it is the first time it appears in the conversation. Consequently, it is usually introduced by an indefinite article (un/una/unos/unas), indefinite adjectives and pronouns (some, none, nothing, many…) or numbers (one, two, three…).

In conclusion, está and hay in Spanish can be used to express location, but they work differently. If you want to put everything you have learned into practice, you can try to write some examples in the comments below. But if you really want to master the differences between these verbs, reserve a lesson with us at Spanishviaskype.com. 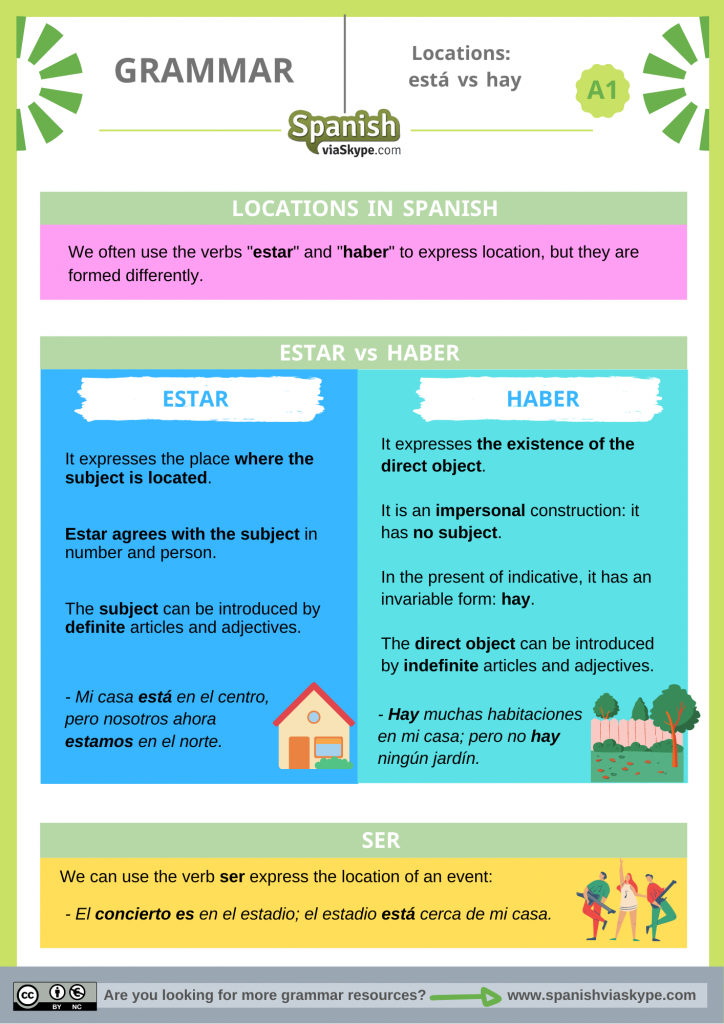