Conditional clauses in Spanish mark a difference between intermediate and advanced students. Conditions can show a realistic requirement that must be met. On the other hand, a condition might have a nuance of subjectivity that shows improbability, incredulity or hypothesis. Here we have the eternal fight between indicative and subjunctive in the Spanish language.

What are Conditional Clauses in Spanish?

First of all, the conditional clauses in Spanish are a subordinate sentence that introduces circumstances or requirements that validate the action in the main clause. In other words, it’s necessary to fulfill the requirements in the secondary clause to get the main one done.

So, if it doesn’t rain tomorrow, we will go to the park. The requirement is clear, it mustn’t rain, otherwise, we will stay at home.

The concept is clear, but the typology of conditional clauses in Spanish is not so simple.

Depending on the speaker’s intention, we can differentiate up to four types of these sentences. The most popular word that introduces conditional clauses is “si” (if), followed by a different verbal tenses.

If we cool water to 0˚C., it get frozen. It’s a physical law, a universally known fact.

“First conditional clauses” shows two different intentions. On the one hand, we can use them to make likely predictions: si + present indicative + future simple:

If you study Spanish at Spanishviaskype.com, you will pass the DELE exam. We express a prediction that, in our opinion, is likely to happen.

On the other hand, using the first conditional we can give advises, make a request or give orders: si + present indicative + imperative

If you want to learn Spanish, reserve a free trial lesson. We advise you to do it using the imperative form.

The “second conditional clauses” are one of the most used conditional clauses in Spanish to express hypothetical situations in the present or the future. The main intention is to show that is unlikely to happen or even impossible. They are formed using si + imperfect subjuntivo + condicional simple.

If I were Spanish, I wouldn’t need to learn Spanish at the university. It’s an impossible hypothesis, due to the fact that the subject’s nationality is not Spanish.

If I won the lottery, I would buy a new car. It’s not an impossible prediction but it’s unlikely to happen.

“Third conditional clauses” show unreal conditions. Since the time frame is the past, the hypothesis are unreal (we can’t change the past, unfortunately!). They use three different options:

If I had taken the course Survival Spanish, I would have been able to speak Spanish during my trip in Madrid. The condition is not possible to be fulfilled because I did not take the course, and the consequences (I couldn’t speak Spanish) are set in the past, too.

If I had  heard about Spanishviaskype.com before, I would have saved much money on Spanish teachers. I cannot change the fact that I didn’t hear about this site before, and the consequences (saving money) are set in the past, too. Actually, it has the same use of the previous clause. The usage of the pluperfect in the main clause is accepted but it’s considered less normative.

I cannot change the place of my birth, and the consequences (I would speak Spanish now) are set in the present.

In consequence, although nobody likes to have conditions and requirements in their lives, the conditional clauses in Spanish are a kind of clauses we use every day. Therefore, si quieres aprender español ahora mismo, reserva una clase de prueba aquí (reserve a free trial lesson here). Learning Spanish via Skype is easy and convenient! 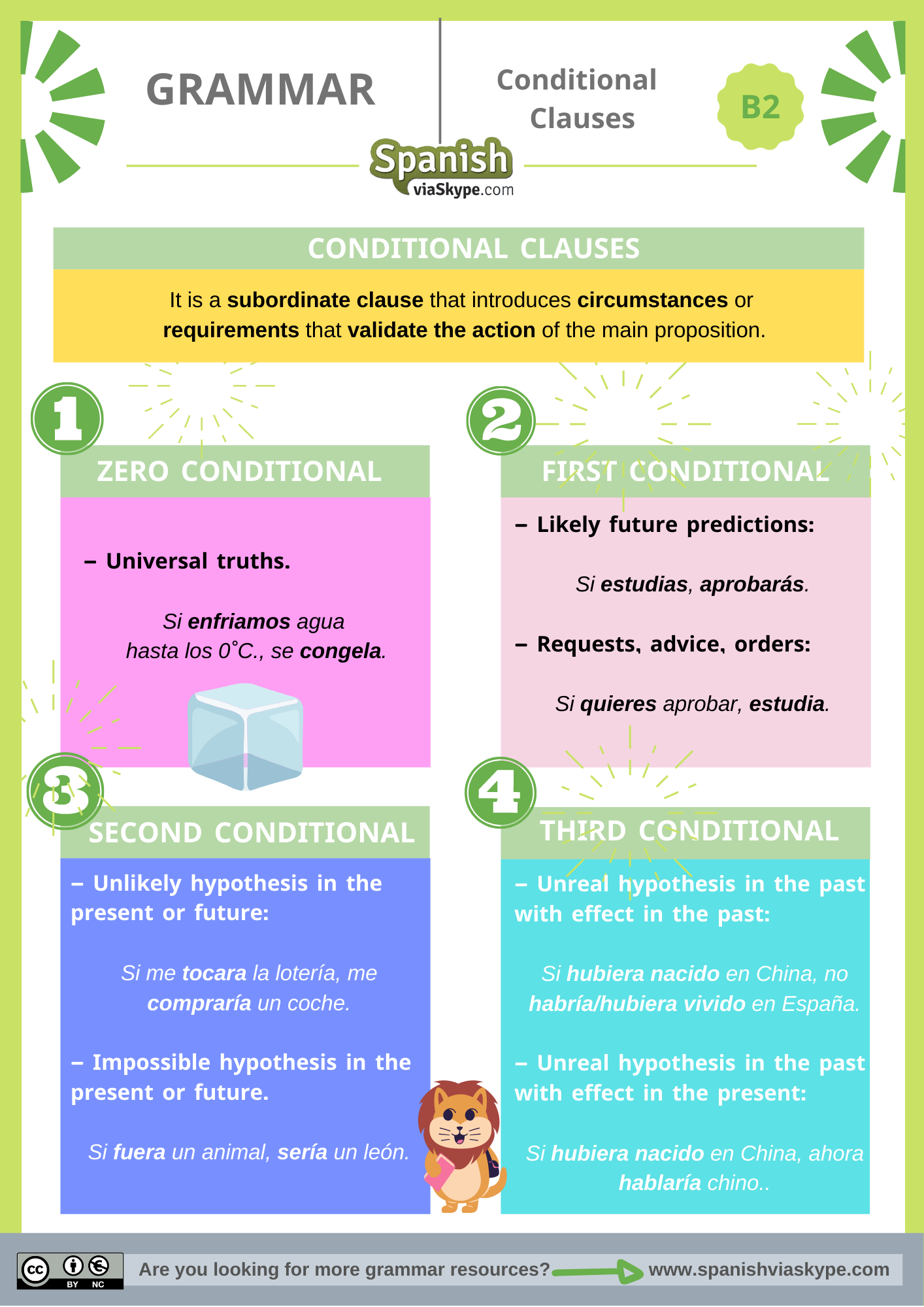