Possessive pronouns in Spanish replace a noun that is the property of another. They also refer to the owner.

In this article we are going deeper into the use of possessives. If you want to know the basics, we invite you to read this article about possessive determiners in Spanish.

As we explained in the previous article, possessives have atonic and tonic forms. Well, all possessive pronouns in Spanish have a tonic form. We remind you that the only tonic determiners are nuestro and vuestro with their gender and number variants.

The Tonic Forms of Possessives

The forms above can be used for both tonic determiners and possessive pronouns in Spanish. 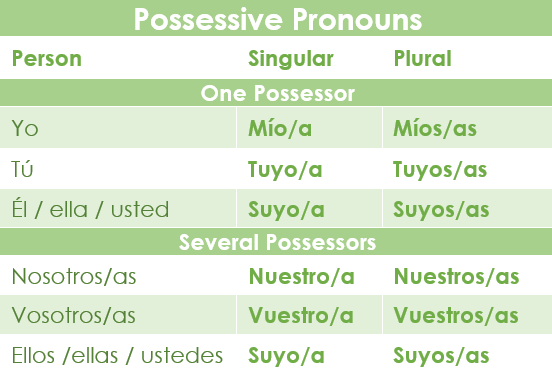 Possessive pronouns in Spanish are usually preceded by a definite article (el, la, los, las). We use them for different purposes. We can show contrast between two elements, usually in comparisons:

We can also select an element from a set:

However, when we ask for the owner of a possession, in the answer we can eliminate the article:

Characteristics and Restrictions of Possessive Determiners

Let’s go back to possessive determiners. We have already learned that the atonic determiners (mi, tu, su) can only be placed in front of the noun. On the other hand, the tonic ones allow their use postposing them to the noun. This option is more commonly used in Latin America than in Spain. For this purpose, as in the case of pronouns, it is necessary to have a definite article before the noun:

Moreover, when we talk about parts of the body, it is assumed that the possession of the subject is implied; because of this, we replace the possessive with a definite article:

However, when there may be confusion, it is necessary to use the possessive:

Mi amigo levantó mi mano (the raised hand is mine).

Finally, it is possible to use the indefinite determiner todo in combination with possessive determiners. When this happens, todo always goes in front:

On the other hand, other indefinites (mucho, otro…) must be used after the possessive:

With this article, we have already delved into the use of possessive pronouns in Spanish and possessive determiners. We hope you can put them into practice in your daily life. But if you really want to improve your level of Spanish, don’t hesitate to reserve classes on Spanishviaskype.com.