Possessive adjective in Spanish, also called determiners, express belonging or possession. They are a type of words that complement a noun and always accompany it. In addition to adjectives, there are also possessive pronouns, which replace the noun.

In this article, we are going to focus on possessive adjectives in Spanish.

Form of Possessive Adjectives in Spanish

As we said before, possessive adjectives or determiners complement and accompany a noun, which expresses ownership or possession. Because of this, they have to agree with it. But simultaneously, they must also agree with the owner. For this reason, we can make the following classification: possessive adjectives of one possessor and several possessors. At the same time, they agree in number and gender (only the first and second person plural) with the property.

The owner is mi padre (third person singular), therefore, the possessive will be su/s. Also, if the possession, la casa, is singular, the chosen form will be su, but if it were plural las casas, the adjective changes to plural, sus.

In this table you can see all its forms: 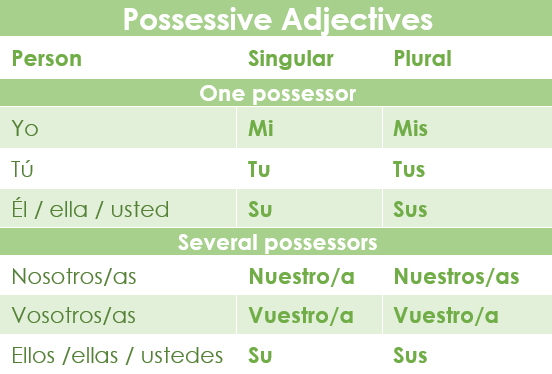 Characteristics and Restrictions of Possessives

The possessive adjectives in Spanish that we have studied in the previous table can be of two types: atonic (mi/s, tu/s, su/s) and tonic (nuestro/a/os/as, vuestro/a/os/as). The attons can only be used before the noun. On the other hand, the tonics can be used after the noun. You can learn more about possessives in this A2 level article.

Unlike other languages such as Italian or Portuguese, possessive adjectives in Spanish do not allow the use of articles (el, la, los, las):

It’s not acceptable to use them with the verb haber when the noun is the direct object:

In this article, you can learn more uses of the verb haber in Spanish.

With this information you can start using possessive adjectives in Spanish correctly. But if you want to know more about them and learn how to use them accurately, reserve classes at Spanishviaskype.com.