The Pluperfect indicative in Spanish

The pluperfect indicative in Spanish is a verb tense that expresses an action that occurred in the past before another action also in the past.

When we use the category “perfect” to qualify a verb tense, we indicate that the verbal action is complete or finished. Thus, the term “pluperfect”, which comes from Latin, means “more than complete”.

Let’s see how the pluperfect indicative in Spanish is formed.

The Pluperfect indicative in Spanish: how is it formed?

Besides being a perfect tense, it is also compound, so it needs an auxiliary verb to be formed. In this case, we use the imperfect preterite of the verb haber and the participle of the main verb. 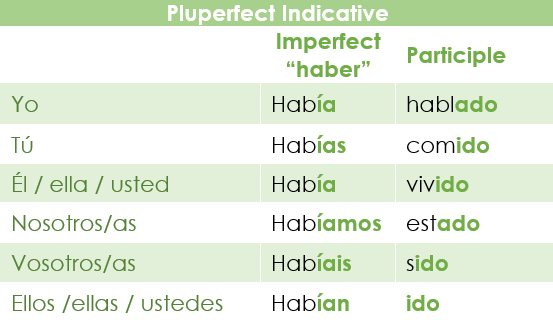 The only difficulty in conjugating the pluperfect indicative in Spanish is the past participle. There are numerous verbs that have irregularities.

The participle is a non-personal form of verbs that is formed by eliminating the infinitive endings and adding -ado, for verbs ending in -ar, and -ido, for those ending in -er or -ir.

Despite this, we must learn the irregular forms of many verbs. Here are some of them:

The Pluperfect Indicative in Spanish: uses

As we said at the beginning of this article, the pluperfect expresses an action in the past prior to another action that also took place in the past. Consequently, to use this verb tense, we need another verb, or another time reference.

Previous action with a point of reference

Unfortunately, this candidate was late for the exam, because it started before his arrival.

However, the use of another verb is not mandatory. We can simply use a time expression as a point of reference:

It is even possible that the point of reference is not explicit in the sentence, if it is known to the interlocutors:

The pluperfect is usually used to talk about first experiences in our life. For this, we usually use a negative sentence:

If you want to take a look at the rest of the past indicative tenses, don’t forget to visit this free grammar resource. This way, you will be able to better understand how to use the pluperfect indicative of the indicative in contrast to the other tenses.

And if you want to practice it with us, don’t hesitate to reserve a lesson with us. You will learn grammar from a communicative and conversational point of view. If you want to try it first, reserve a trial lesson with no obligation. This way, your Spanish will be “more than perfect”.