The Verb Gustar in Spanish

The Verb Gustar in Spanish: its Conjugation

Basic level students are accustomed to conjugate verbs using endings that agree with the person who performs the action:

However, the verb gustar in Spanish is constructed in a different way. The person does not agree with the verb ending. Instead, the thing we like is the grammatical subject of the sentence. A person usually likes something or several things. Because of this, the present indicative endings most commonly used with the verb gustar in Spanish are the third person singular (-a) and plural (-an).

In addition to nouns, we can also like verbal actions. In this case, the most commonly used form is the infinitive. When the infinitive is the subject of the verb gustar, it must take the third person singular ending.

In short, we usually use gusta, with singular nouns or with infinitives, and we use gustan, with plural nouns.

Other Characteristics of the Verb Gustar

Another common feature we can find in the verb gustar in Spanish is the use of definite articles or determiners before the nouns:

To further increase the difficulty of learning it, the verb gustar in Spanish is obligatorily formed with an indirect object. This complement is the person who “receives” the like. We must remember that indirect objects in Spanish are always formed with the preposition a. Because of this, the pronoun to refer to these persons is not the subject ones (yo, tú, él, ella, usted, nosotros/as, vosotros/as, ellos/as, ustedes). On the contrary, we must use indirect object pronouns: (me, te le, nos, os, les).

Also, to emphasize or clarify who is the person receiving the taste, we can optionally use the prepositional pronouns of indirect object, preceded by the preposition a: a mí, a mí, a ti, a él/ella/usted, a nosotros/as, a vosotros/as, a ellos/as, a ustedes. However, the pronouns we saw before (me, te le, nos, os, les) are still obligatory.

When we want to negate the verb gustar in Spanish, we must place the negation adverb no right in front of the indirect object pronoun:

Finally, if we want to emphasize or quantify the degree of liking, produced by the subject of the sentence, we can use quantifiers such as mucho or nada. However, we must be careful with the adverb nada. If we use it after the verb, we also have to introduce the negation with the adverb no. The placement of these modifiers is quite free, although the most common is to place them after the verb:

In short, at first glance, the verb gustar in Spanish seems very complicated. However, you just need to practice it. Leave us a comment and tell us what you like and don’t like. Do you like learning Spanish very much? Don’t you like Spanish verbs at all? We like to help you. 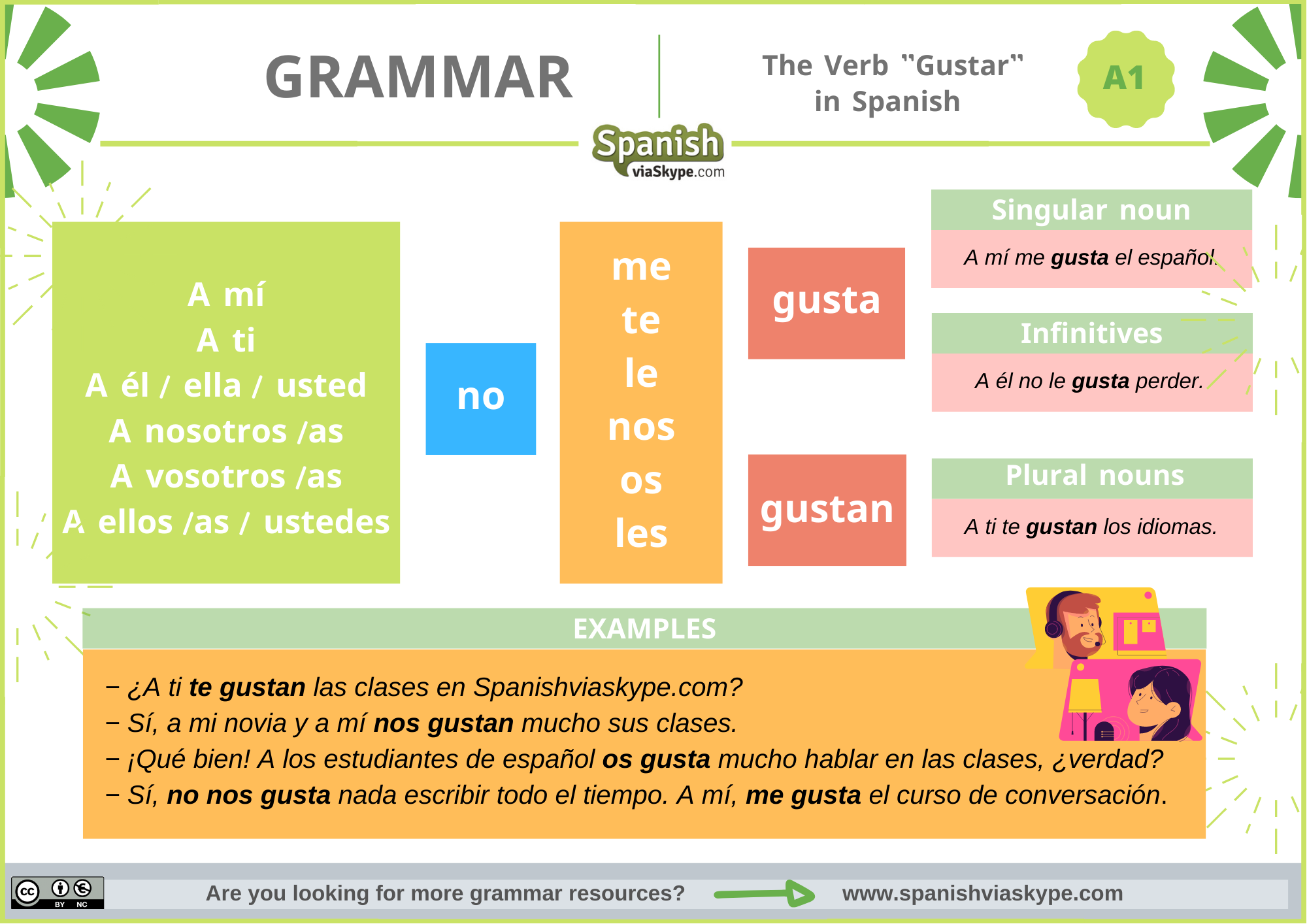