The Future Perfect in Spanish

The future perfect in Spanish is one of the verb tenses that we use less frequently. However, its use is essential to express the chronological order of actions in some situations. Moreover, despite its name, it can also have different values than the future tense. Today we are going to know its origin, its form and its uses in Spanishviaskype.com.

When we study verb tenses, it is always a good idea to know its name. The full name is futuro perfecto or compuesto de indicativo. It is future, that is, it indicates an action situated after the moment of speech; at the same time, it is perfect, that is, it expresses a finished action; furthermore, it is compound, so it is formed by more than one word: an auxiliary verb and a main verb; finally, it is indicative, consequently, it expresses real actions, facts, information… However, as we will see later, this is not entirely true, since we are talking about the future. We would like to know the future for sure!

How Is The Future Perfect in Spanish formed?

As we have said before, in order to form the future perfect in Spanish we must use two verb forms: an auxiliary verb, the verb haber in the future simple, and a main verb, in the participle. This non-personal form of verbs is constructed by adding the endings –ado (for the first conjugation –ar) and –ido (for the second and third conjugation -er / -ir). If you need to remember how to form the future simple indicative in Spanish, you can read this article. 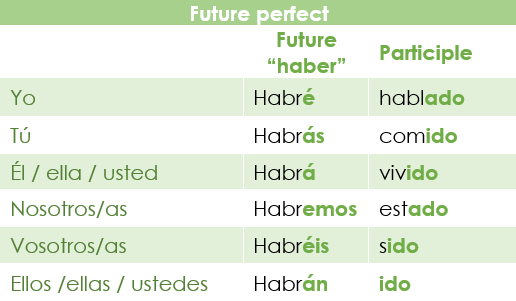 How Is The Future Perfect in Spanish Used?

Action in the future prior to another future action

As we already know, the future perfect in Spanish expresses an action in the future. But we must remember that it is a “perfect” tense. Because of this, this tense also expresses a completed action prior to another action.

As we see in this example, firstly, I will finish the report, and then, my boss will arrive at the office.

Surely, our readers are familiar with this explanation. If we remember, the preterite pluperfect indicative has the same value, but in the past.

To reinforce the idea of “finished and previous action”, we usually use temporal expressions like: ya, para cuando, antes de que, antes…

Probabilities in the recent past with the future perfect in English

The future perfect in Spanish has a very peculiar use, which differentiates it from other languages, such as English. Although it may seem paradoxical, we can express an action in the past. However, this action is actually a hypothesis or a speculation. In any case, this past is limited. It must be an unfinished or recent past. Surely, our students will remember that this feature applies to another verb tense: the present perfect indicative.

In other words, with the present perfect we express facts, certain actions, whereas with the future perfect in Spanish, we indicate suppositions, speculations.

—Pues, no. Esta semana no he tenido tiempo; he trabajado mucho.

In this example, we can see how the first speaker makes an assumption (habrás ido). This assumption is contradicted by his interlocutor with the actual facts (no he tenido tiempo and he trabajado).

As we can see, the future perfect in Spanish is a tense that has very specific and limited uses. Although it is not the most used tense, we need to learn to use it at the right time. If you want to practice in a real class, don’t hesitate and reserve a class at Spanishviaskype.com: seguramente nunca habrás tenido una experiencia similar. 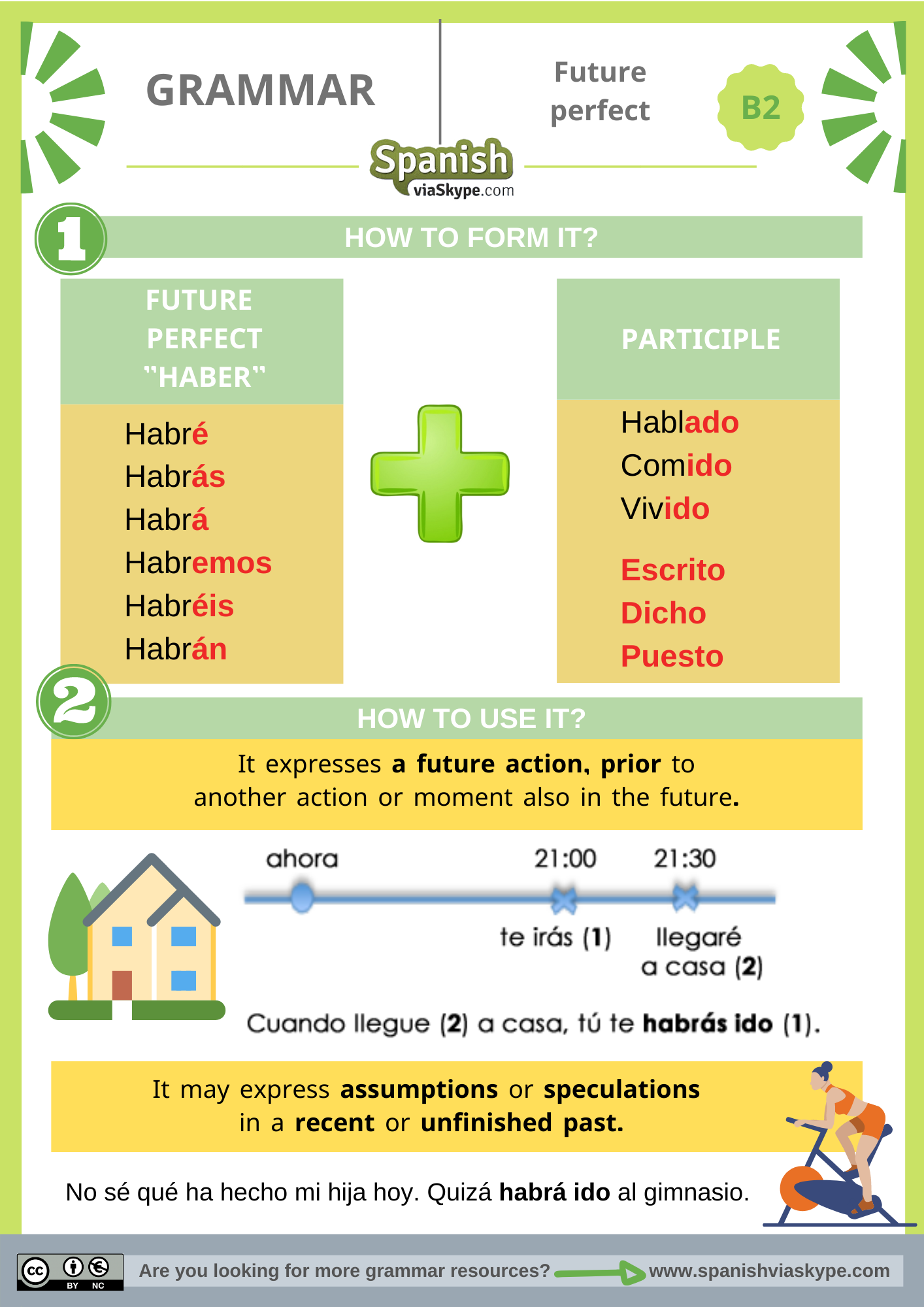