General rules of accentuation in Spanish

The general rules of accentuation are one of the keys to writing correctly in Spanish. Usually, teachers do not put the necessary emphasis on their study. However, native speakers have to struggle with accents from a very early age. At school, the absence of a tilde could mean the difference between a pass or fail in an exam.

Today we will introduce this topic and learn the general rules of accentuation, regardless of the exceptions. But, stay tuned to our free grammar resources section on Spanishviaskype.com; soon, we will publish another article with those exceptions.

To begin with, we should ask ourselves these questions: what is accentuation and what is it for? Accentuation is the emphasis we should put on a certain vowel when we pronounce a word. The correct use of accentuation is so important that it can differentiate meanings, as well as verb tenses and verb persons. For example:

We should not confuse the concept of accentuation and graphic accent. Most Spanish words are tonic, that is, they have an accent. But only some of them have a graphic accent or tilde. The tilde is an orthographic sign that helps the reader to know where to place the stress in a word. Therefore, let’s go directly to the general rules of accentuation in Spanish.

To understand the general rules of accentuation in Spanish, we must learn how to break a word into syllables. A syllable is a group of sounds in a word that is pronounced in a single utterance. In fact, if we pronounce a word very slowly, we will realize that we are dividing it into smaller parts:

To know where to write a tilde, we must identify which is the stressed syllable; that is, which syllable is pronounced with more force:

In Spanish, we can distinguish three types of words, depending on which syllable is stressed:

When we add pronouns to the end of a verb form, we can even find stressed syllables before the esdrújulas. Traditionally they are called sobreesdrújulas (có – me – te – lo).

The first of the general rules of accentuation in Spanish has to do with monosyllabic words. These are words that have only one syllable. In this case, in general, we do not use accents on them.

However, there are exceptions. On the Spanishviaskype.com blog, we already published an article about the diacritical tilde in Spanish. If you want to go deeper into this topic, we recommend that you read it before continuing.

Use of accents in agudas words

As we said before, agudas words are those that have the stress on the last syllable. These words have tilde on the stressed vowel when the word ends in a vowel, -n, or -s.

Llanas words have the stress on the penultimate syllable. We use the accent mark on the stressed vowel when the word ends in a consonant other than -n, or -s.

Esdrújulas words have their stress in the third to last syllable. They always have a tilde on the stressed vowel:

As we said before, if the stressed syllable is before the third to last syllable, we are dealing with an sobreesdrújula word. This is produced by the use of enclitic pronouns (pronouns attached to the end of the verb). They are only found in infinitives, gerunds and affirmative imperatives. Sobreesdrújulas words always have a tilde.

These are the general rules of accentuation in Spanish. Of course, there are always exceptions that we must learn. For that, as we said at the beginning of the article, you should stay tuned, because soon we will publish more about tildes. To keep up to date with our news, follow us on Twitter, Instagram and Facebook. 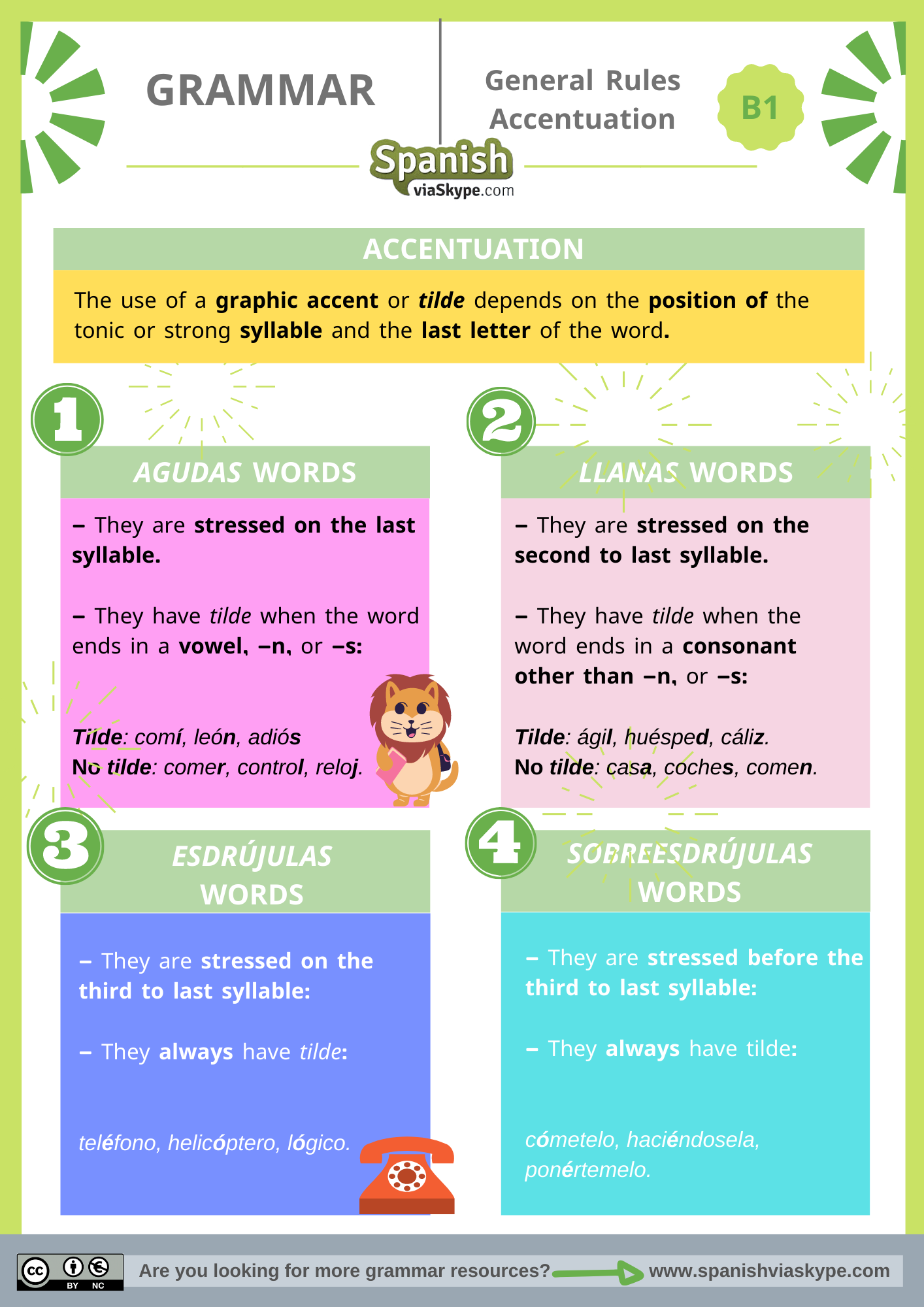