Uses of the Pronoun Se as a Verb Mark

The uses of the pronoun se in Spanish can be divided into two groups: when the pronoun has a syntactic function (direct or indirect object) and when it is simply a verbal mark or morpheme. When we are dealing with the latter option, the pronoun is used to change the nature of the sentence and not to introduce a meaning or replace a person.

Before going deeper into this topic, if you have not read our article on the uses of the pronoun se with syntactic function, take a few minutes to do so. This way, you will better understand the other uses of this pronoun.

Now, let’s see how the pronoun se works when it’s used as a verbal mark or morpheme. With this usage, the verbal mark can change the nature of the sentence. Thus, we can find ourselves with a passive mark, impersonal, middle voice or pronominal verbs.

There are different ways to express the passive voice in Spanish. One of them is the use of the pronoun se. When this occurs, the sentence has a passive meaning but an active form. The subject receives the action of the verb, not performs it, but the verb is conjugated in active form with the pronoun se. Therefore, the verb and subject agree in number and person.

Speakers usually choose this passive form when the agent of the action is unknown or it’s not interesting to mention it. Therefore, it does not appear in these constructions:

In the first example, the agent is los estudiantes, but it is so obvious that we have no interest in mentioning it. In the second one, we probably don’t know who discovered the fossil.

The Uses of the Pronoun Se in Impersonal Sentences

Another use of the pronoun se can be found in impersonal reflexive sentences. They are characterized by the absence of a subject, either semantically or grammatically. Therefore, in impersonal sentences with the pronoun se, the verb is always in the third person singular.

In the first group we find sentences that express generalizations, therefore, we do not refer to a specific subject:

With this example we indicate that everyone, in general, eats well in Spain.

This type of reflexive impersonals is formed by a transitive verb, whose direct object is personal, preceded by the preposition a.

This last type of reflexive impersonals can sometimes be confused with reflexive passives. In fact, if we use them with the latter value, their meaning changes a little. With the impersonal form, we refer to specific people we know. However, with the use of passive, we talk about people in general.

The Uses of the Pronoun se: Middle Voice

Another of the uses of the pronoun se that we are going to study is a bit complex. Again, the pronoun is a verb mark. At first glance, they look like reflexive sentences; however, this only affects the form, but not the meaning. In reality, the subject does not actually perform and receive the action, but rather affects the subject without its control. This experiences a physical or psychic change. This is what we call middle voice: neither active nor passive.

With Subject of Person or Animal

We can use the pronoun se when the subject is animate and undergoes a physical or mental change, usually involuntarily:

With Verbs of Motion

We also find these constructions with animate subject and verbs of motion:

Not only humans and animals can undergo changes of state. Things and places are also susceptible to being subjects of a sentence in the middle voice. Of course, the change occurs accidentally or involuntarily by the subject.

The Uses of the Pronoun se with Pronominal Verbs

Finally, we have come to the last use of the pronoun se in Spanish. There are a number of intransitive verbs that require a pronoun to be formed. When this happens, they are usually accompanied by a prepositional complement called suplemento or complemento de régimen. This makes them really complex to use. The student must remember the pronoun and, in addition, the preposition. But, to make matters worse, the preposition is impossible to deduce in most cases. Therefore, it is necessary to learn them by heart. They are called pronominal verbs. We can distinguish two types:

These are verbs that only exist in Spanish in their pronominal form and it is not possible to use them independently.

These are verbs that can be used with both forms. However, when they are used pronominally, they change their meaning.

In the first example, my father manages or rules the company very strictly. On the other hand, in the second sentence, my father goes to the company.

These are the uses of the pronoun se in Spanish. As you can see, it is a very complex subject, so we recommend that you reserve classes with us at Spanishviaskype.com. We will be able to help you to learn these uses and to put them in practice. 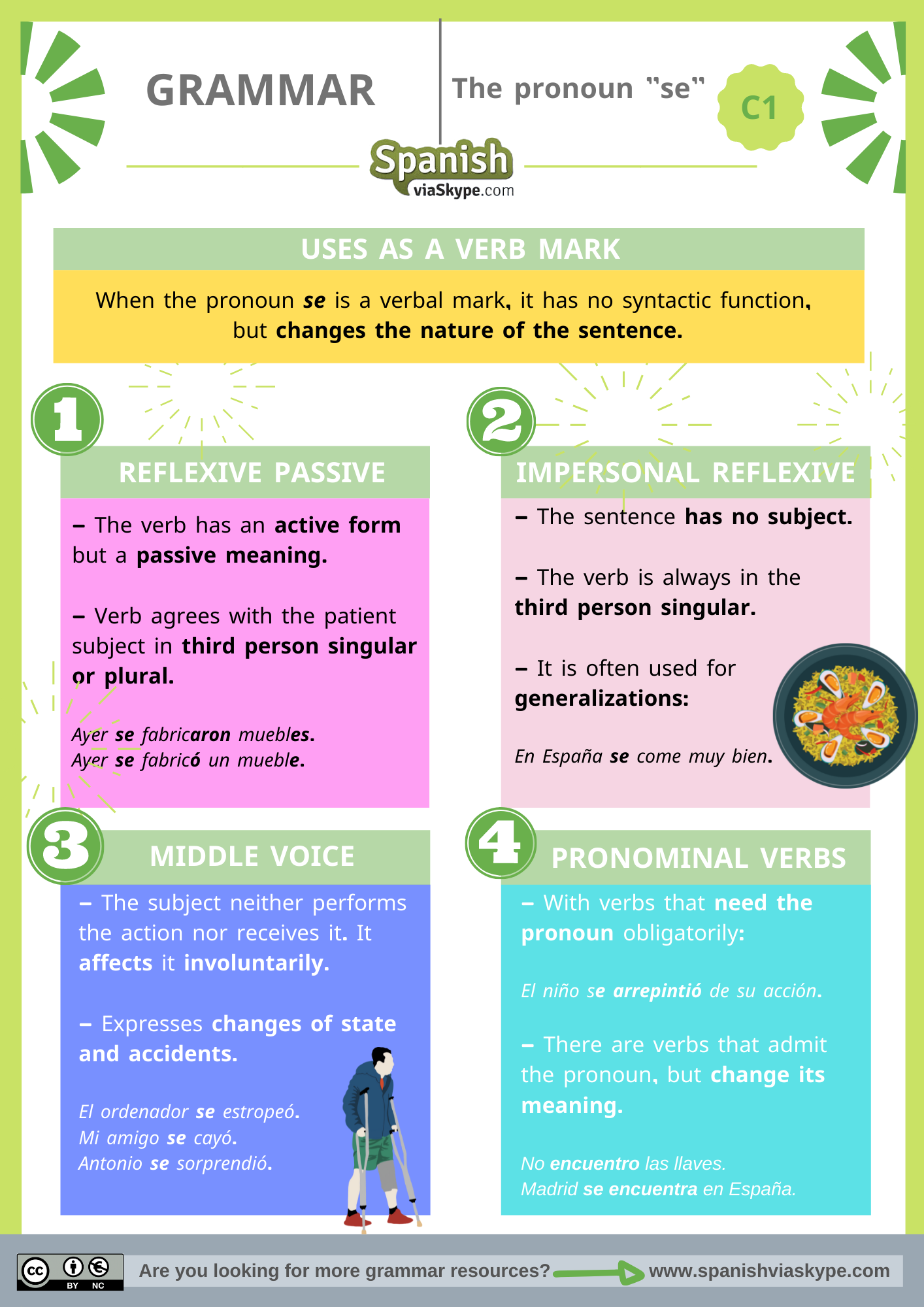