The passive Voice in Spanish

Passive voice in Spanish is the relationship between the action of the verb and the subject of that sentence. If the subject does the action, it’s called “agent” and we need to speak in an active mode. On the other hand, if the subject doesn’t do but receives that action (then it’s called “patient”), then we’ll use the passive option. There are different types of constructions. Let’s see them:

Process passive voice in Spanish with the verb “ser”

This kind of passive is also called pasiva propia (actual passive). Using this kind of sentences we focus on the action, on the process. We answer the question “what is happening?”. It’s formed in this way:

Verb “ser” + past participle of the main verb.

For example: El libro ha sido escrito por el autor (the book has been written by the author).

Notice that the “agent” of that action is introduced by the preposition “por” (“by” in English). The patient subject (“el libro”) is the direct object in the equivalent active sentence and the agent (“el autor”) is actually the subject in the active one.

All the verbal tenses can be transformed in this way. The only requirement is that the active sentence must be “transitive” (with a direct object) in order to be changed into passive.

Now, let’s see another type of these constructions: the state passive.

State passive voice in Spanish with the verb “estar”

When we use this construction, we emphasise the description of the event and its ending. Because of that, it’s more important the state of the subject. This is how we form it:

Verb “estar” + past participle of the main verb.

For example: El libro está escrito (the book is written).

As you can see, the passive meaning has an impact on the fact that the book is finally written, it’s finished.

As it happens with the “process passive”, all tenses might be used:

Finally, let’s see a kind of this voice that uses the pronoun “se”.

Reflexive passive with the pronoun “se”

This construction is actually an active sentence from a morphological point of view. However, it has a passive meaning. This variation, uses the reflexive form of a transitive verb in order to talk about an impersonal action; the agent of the sentence is not known because we are referring to general facts and it’s also used to give instructions. This is how we form the reflexive passive voice in Spanish:

The pronoun “se” + the main verb in the third singular or plural person.

It’s enough for today. Now that you can speak using different voices, as a ventriloquist, leave some comments below. Try to transform different active sentences into all these kinds of passive voice in Spanish. If you want to learn more about this topic, don’t hesitate and reserve lessons on Spanishviaskype.com. 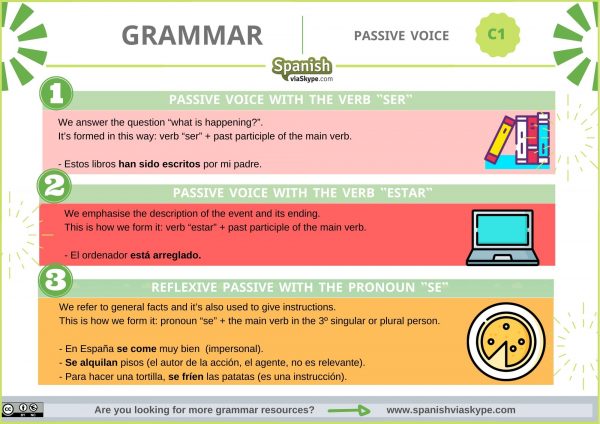