The Gerund in Spanish: Form and Basic Uses

The gerund in Spanish is a non-personal form of verbs. Most verb forms show which person performs or suffers the verbal action. For this purpose, we use the desinences or endings. For example:

However, there are three verb forms that do not have these endings and, therefore, their purpose is not to express the person. The non-personal forms of verbs in Spanish are the infinitive (hablar), the gerund (hablando) and the participle (hablado).

In this article we are going to focus on how the gerund in Spanish is formed and its most basic uses.

How Is the Gerund in Spanish Formed?

To form the gerund in Spanish we must isolate the verb stem. To do this, we will remove the infinitive ending. Subsequently, we will add the endings -ando for verbs of the first conjugation (-ar) and -iendo for the second and third conjugations (-er / -ir).

Irregular Verbs in the Gerund

Although at first glance, the gerund in Spanish may appear to be an easy form to conjugate, there are quite a few irregularities. These are mainly vowel changes in the verb stem and variations in the endings.

Vowel changes in the stem

There are some groups of verbs that suffer a change in the vowels of their stem. We must remember that this is very common in many verb tenses in Spanish. Let’s look at these irregularities:

One of the verb tenses with the greatest vowel irregularities is the present indicative. Well, the verbs of the third conjugation (-ir) that in this tense had the vowel change e > i, will also suffer it in the gerund in Spanish. If you want to review the irregular verbs in the present indicative, you can read this article.

Here you’ll find some examples of gerunds with this irregularity:

Some of the verbs of the second (-er) and third (-ir) conjugations that suffered the vowel change in the stem o > ue, in the gerund in Spanish will change as follows: o > u.

Changes in the endings

In addition to vowel changes in the stem, the gerund in Spanish can also suffer irregularities in the endings. Let’s see when:

When the stem of a verb ends in a vowel, the ending -iendo changes the vowel i into a consonantal sound (y).

If the verb stem ends in the consonants ñ or ll, the ending –iendo loses the vowel i.

Basic Uses of the Gerund

The gerund in Spanish can have a verbal or adverbial use. Let’s see how it works in both cases:

Verbal use of the gerund.

We mainly use the gerund in verbal periphrases. They are a type of verb construction formed by a personal verb form and another verb in non-personal form (in addition to other linking elements). Perhaps, the most used verbal periphrasis in basic levels is estar + gerund. Here is an article where you can study it in more depth. These are some examples of verbal periphrases with gerund:

Adverbial use of the gerund: mode

When we use the gerund in Spanish as an adverb, we enrich our sentences with circumstantial meanings. We can express time, mood, cause, condition… In this article we are only going to look at one of these meanings which is the most used at basic levels: mood.

We can use the gerund to express the way in which we perform the verbal action. It is very useful to answer the question how? Here are some examples:

Don’t forget that if you want to practice the gerund in Spanish or go deeper into its uses, you can reserve classes on Spanishviaskype.com. You will always have native Spanish teachers ready to help you. 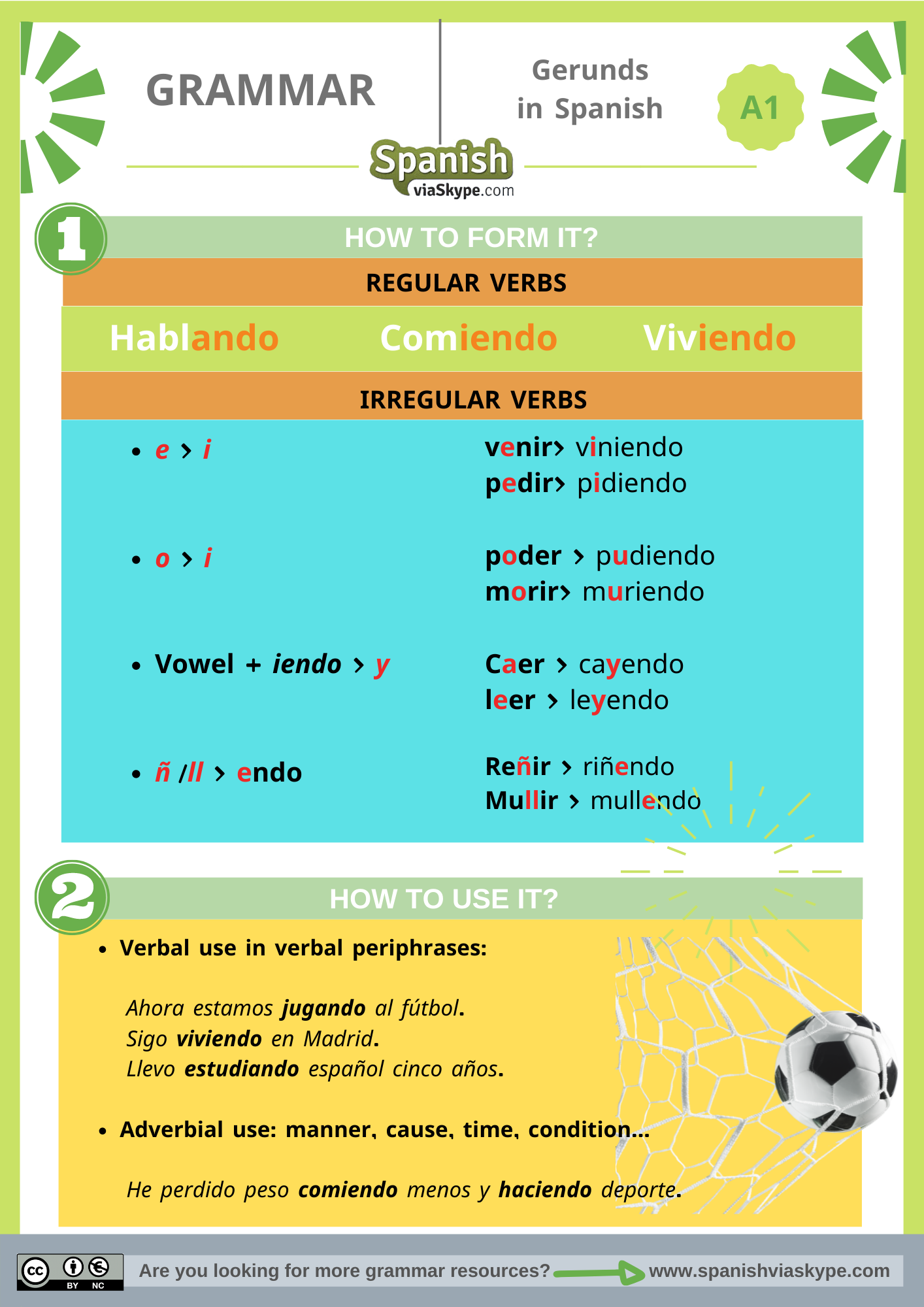