The Origin of the Word Azar in Spanish

The origin of the word azar is very unsuspected and curious. There are many words in Spanish that are related to the concept of luck: suerte, fortuna, ventura, sino, destino, fatalidad, casualidad… In addition, there are countless variants in the informal register: chamba, potra, chiripa, chorra… However, today we are going to focus on the origin of the word azar in Spanish.

Etymology of the Word Azar

According to the Real Academia Española, the most widespread meaning of this term is “chance, fortuitous event”. However, three other meanings refer to the world of “games of azar (chance)”. There we can find the first clues about its evolution.

The origin of the word azar is in the Arabic az-zahar or flor (flower) in Spanish. In fact, we also have the word azahar in Spanish, which refers specifically to the flower of the orange, lemon or citron tree. But how could a word that refers to a flower be related to the concept of luck?

The Origin of the Word Azar and Games

The answer to the previous question can be found in the game of tabas (knucklebones). In this game, the astragalus (a bone from an animal’s leg) was thrown. On this bone, a mark in the shape of a flower was made on one of its sides. If the bone fell in such a way that the flower was visible, the player won. It should be noted that, unlike a die, la taba had irregularly shaped sides. Therefore, the options for calculating the odds were difficult. When a player got his taba to fall on the side of the flower, he shouted: az-zahar!

Eventually, the word azar evolved to be used as a synonym for luck. It even found its way into the informal register, as the idiomatic expression tener una flor en el culo (to have a flower up one’s ass). Although it would be quite amusing to imagine a person with a flower on “his nether regions,” the word culo actually refers to the side of the taba where the flower was marked. Thus, someone who tiene una flor en el culo is a very lucky person, who always achieves his goals in an unlikely way. 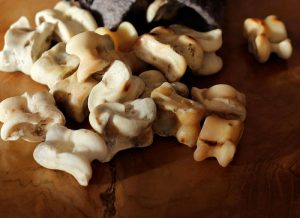 An Unexpected Evolution: from Luck to Danger

We have just seen the evolution of the word azar and its use today. An English speaker, however, might confuse it with the term hazard (peligro in Spanish). This English word shares the origin of the Spanish word azar. Both come from the Arabic az-zahar (flower) and the world of gambling. These recreational activities could generate great economic benefits to the winner of a game. However, they were usually played in disreputable places and not all players knew how to behave when they lost. Therefore, the word hazard came to designate the risk or danger that could be suffered in these games.

As we have seen, the origin of the word azar is very interesting. If you like the etymology of Spanish words, do not hesitate to visit the Spanishviaskype blog, where we periodically publish articles with similar content.